This documentary talks about the way large companies are infiltrating the farming industry and taking control of it. To me it was creepy the way they are genetically controlling those crops in the USA and worldwide. The documentary is a good reminder of why we as consumers cannot let these large companies take control of everything they want.


Watch full screen on hulu.com
Posted by Lorena at 20:33 5 comments:

Email ThisBlogThis!Share to TwitterShare to FacebookShare to Pinterest
Labels: documentary, the future of food

I've been making pizza dough a lot, and eating pizza a lot... I just keep forgetting to take pictures.
Posted by Lorena at 14:29 3 comments: 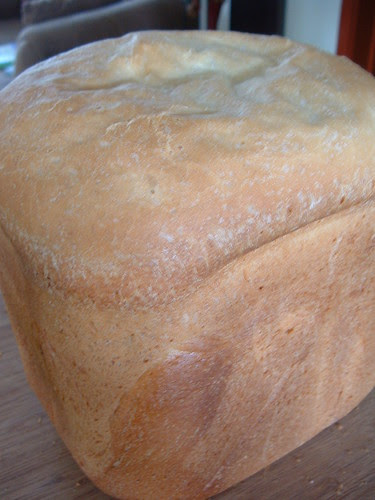 There is nothing like eating a warm just-baked slice of bread with butter or a piece of cheese; even alone, bread is the best comfort food you could offer me. Bread baked right at home is all I need to make a stressful day melt away from my body; after mixing the ingredients and waiting hours for the yeast to do its magic , by the time the aroma of the yeasty bread begins to invade my house I can barely wait to sink my teeth into the crusty goodness.

I’ve been baking breads with my mom since she bought a Bread Machine, but we always end up baking oatmeal bread or 7 grain bread but I wanted something more basic. There are thousands of variations when it comes to bread and I still haven’t tasted one that I don’t like, but sometimes going back to the basic white bread is almost better that a fancy-schmancy fifty-ingredients loaf. For me most of the time, simpler is better. 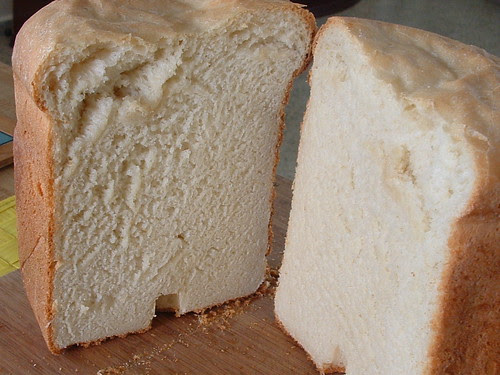 Pour the water into the bread machine pan. However, if the instructions for your machine specify that the yeast is to be placed in the pan first, reverse the order in which you add the liquid and dry ingredients.

Sprinkle over the flour, ensuring that it covers the water. Add the salt, sugar and butter in separate corners of the bread pan. Make a small indent in the centre of the flour (but not down as far as the liquid) and add the yeast.

Remove the bread at the end of the baking cycle and turn out on to a wire rack to cool. 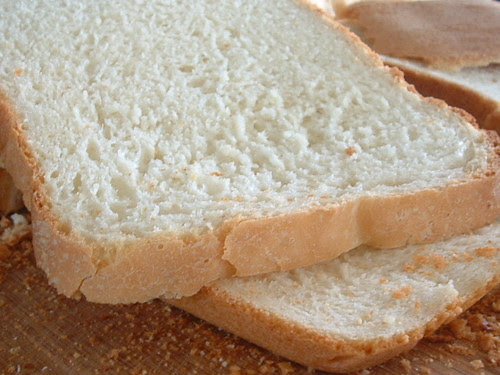 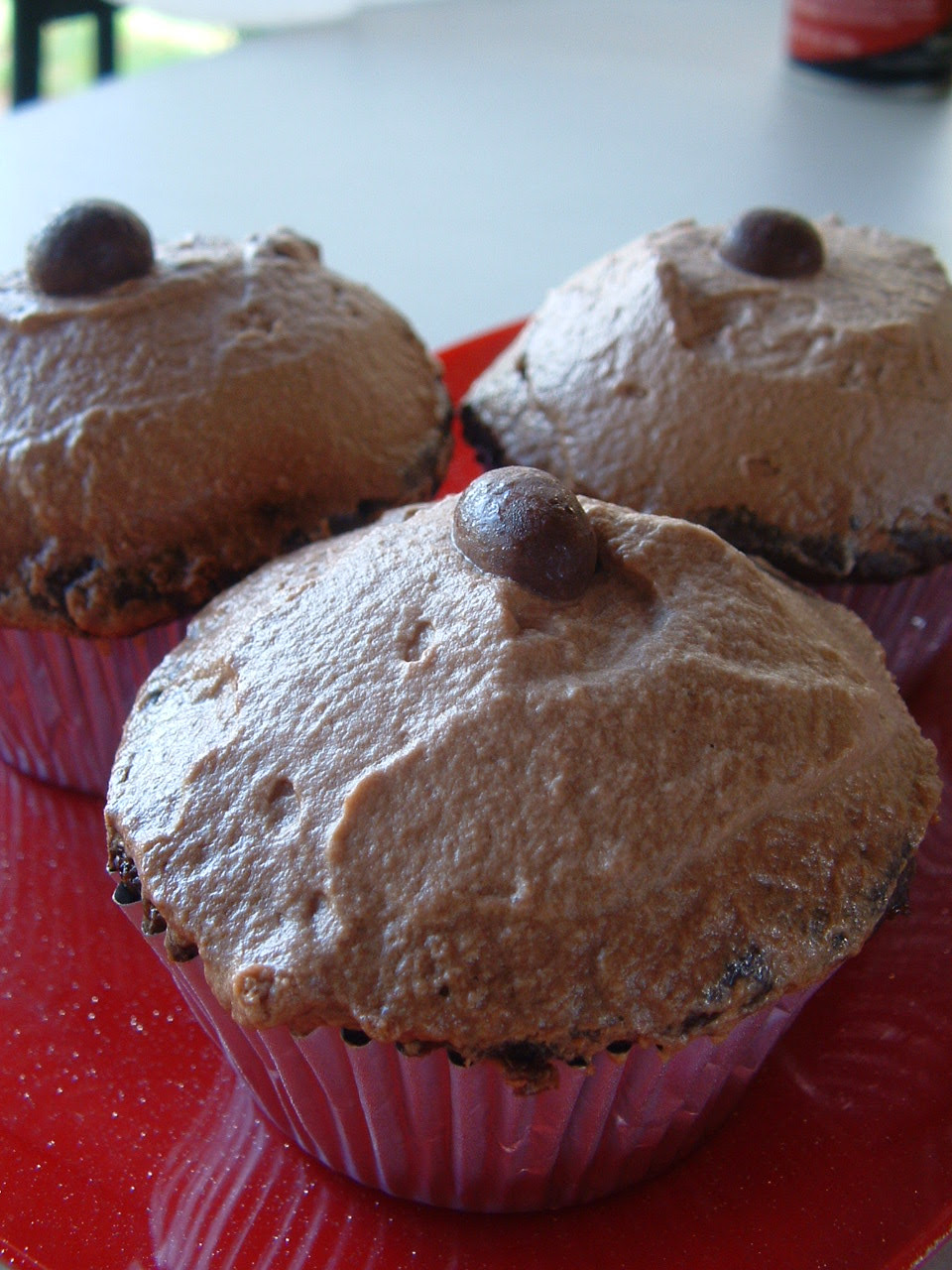 It’s been a long time since I’ve baked cupcakes, but lately I’ve missed eating cupcakes and since there are no “cupcakeries” in the Island, if I crave them I have to bake them. My mom wanted to bake and I used the opportunity to drill the idea of cupcakes into her head until convinced that cupcakes were the way to go. With my brother’s birthday approaching we used this batch as a taste test for the Mezzo-Mezzo Cupcakes from Cupcakes Galore (any excuse is good for baking cupcakes!) and they turned out to be awesome. Sadly the batch I made for my brother’s birthday didn’t turn out as moist and fluffy as the first batch. I think this might have been either because I used all-purpose flour instead of the usual unbleached all-purpose flour I use or because the flour I used was cold from being in the fridge for a few months now. Either way they were still good, but not as fluffy as the first batch. Another thing that I varied both times was that I creamed the butter and sugar instead of melting the butter and adding the sugar to the dry ingredients. In general both batches were chocolaty without overwhelming the palate followed by a slow and mellow coffee flavor. The Chocolate Whipped Cream Frosting was awesome; it was like a nice creamy cup of cappuccino melting in your mouth, it was so good I wanted to eat the frosting alone. If I could I would eat them every day.

In a large bowl, mix all of the dry ingredients together and set aside.

In another bowl, cream butter and sugar until white and fluffy; add eggs, and sour cream together. Pour into dry ingredients, rapidly mixing with a wooden spoon until batter is smooth.

Spoon batter into cupcake papers, filling cups about two-thirds full. Cook for 15-20 minutes or until a tester inserted into the center comes out clean.

Remove from oven and cool.

To make the frosting: put cream, sugar, cocoa, and coffee powder in a large bowl. Stir, cover, and let sit in the refrigerator for about an hour, until chocolate and coffee have dissolved. Remove from refrigerator and beat with an electric beater until stiff. 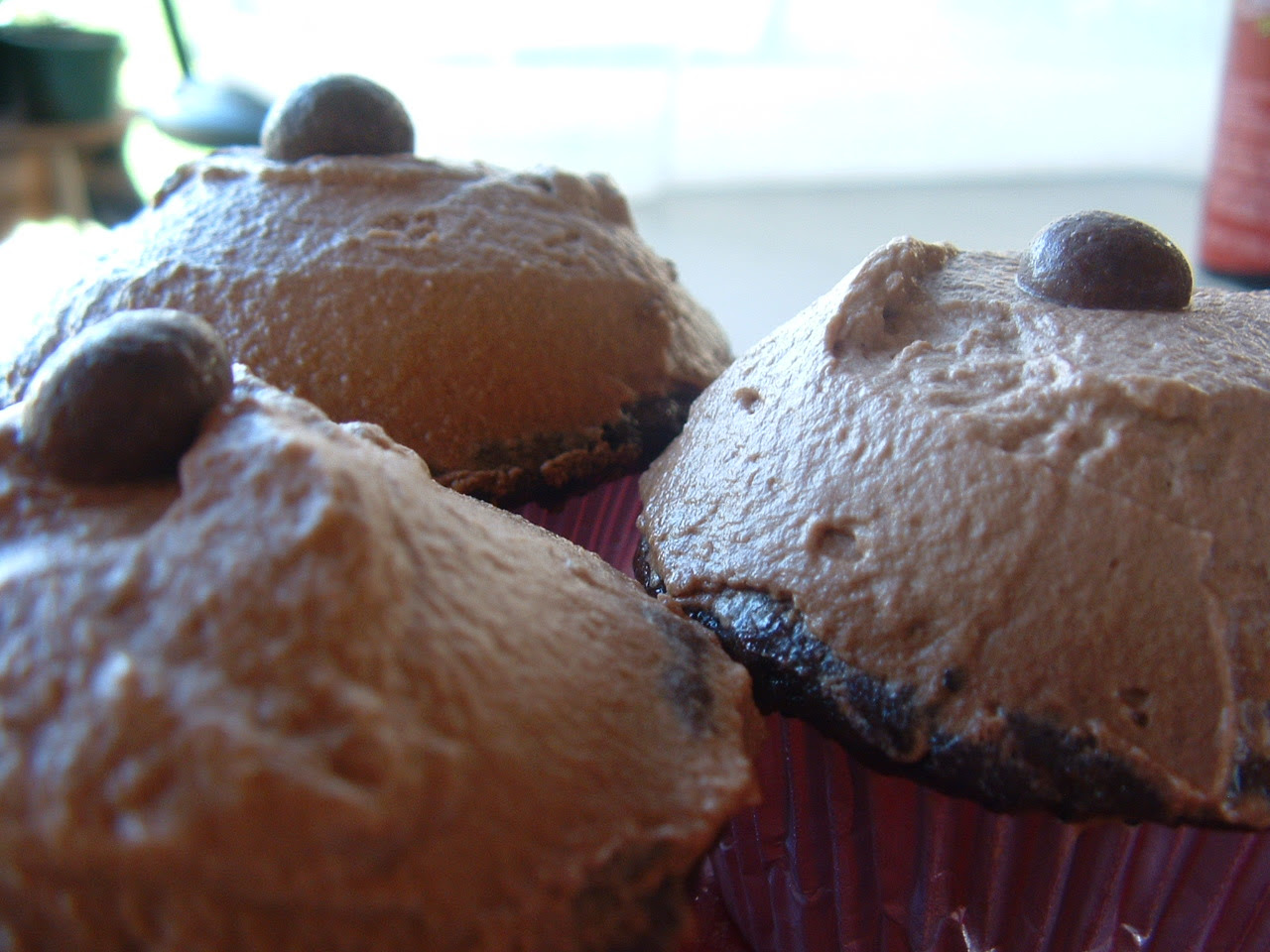 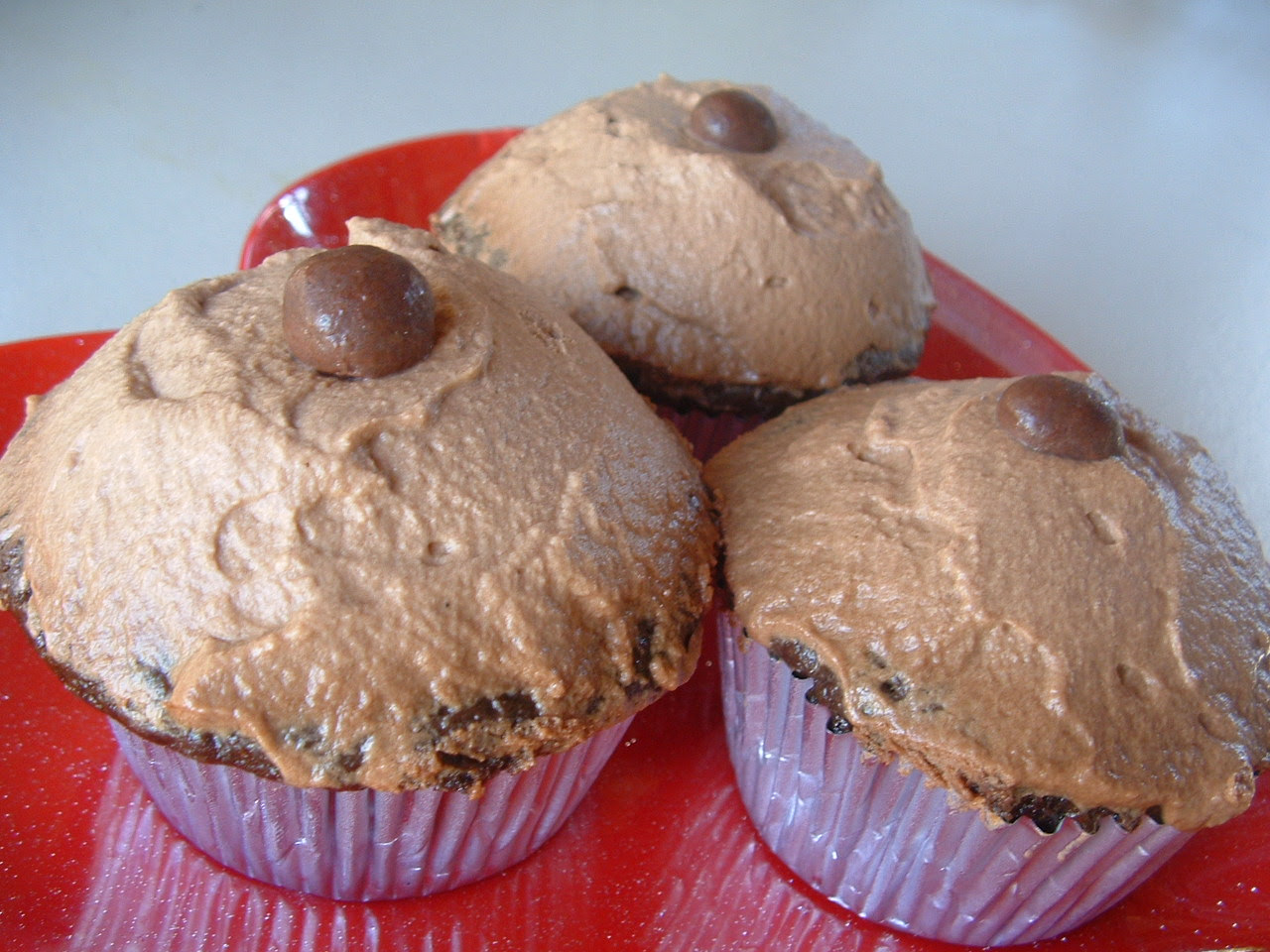 Talking about my garden

One of the things I enjoy about living in a tropical island is that plants grow throughout the year without worrying about the changes of the seasons because in PR we just have two: hot and less hot. I can easily buy a tomato plant in January as in June, as they say, the sky is the limit. I had envisioned a lush garden filled with tomatoes, cabbages, carrots and every kind of vegetable at the grasp of my hands! Only to discover that I end up killing most seedlings that I plant and the few that do survive look like they are about to expire any minute now. Therefore, I’ve come to the conclusion that I’ll leave the difficult process of nourishing seeds into beautiful plants to the professionals. A couple of weeks ago I decided to buy plants since I had grown desperate, that planting seeds takes a lot more patience than I have. Seeds grow so slow and die so easily on me that I bought a few plants, already grown… easier to take care of. This morning I went to water them and discovered that my eggplant plant (shrub?) had a delicate little flower and a few more about to bloom, so people (person? Does anyone read this?) very soon you’ll see quite a few eggplant recipes. Will I dare to make eggplant cupcakes? 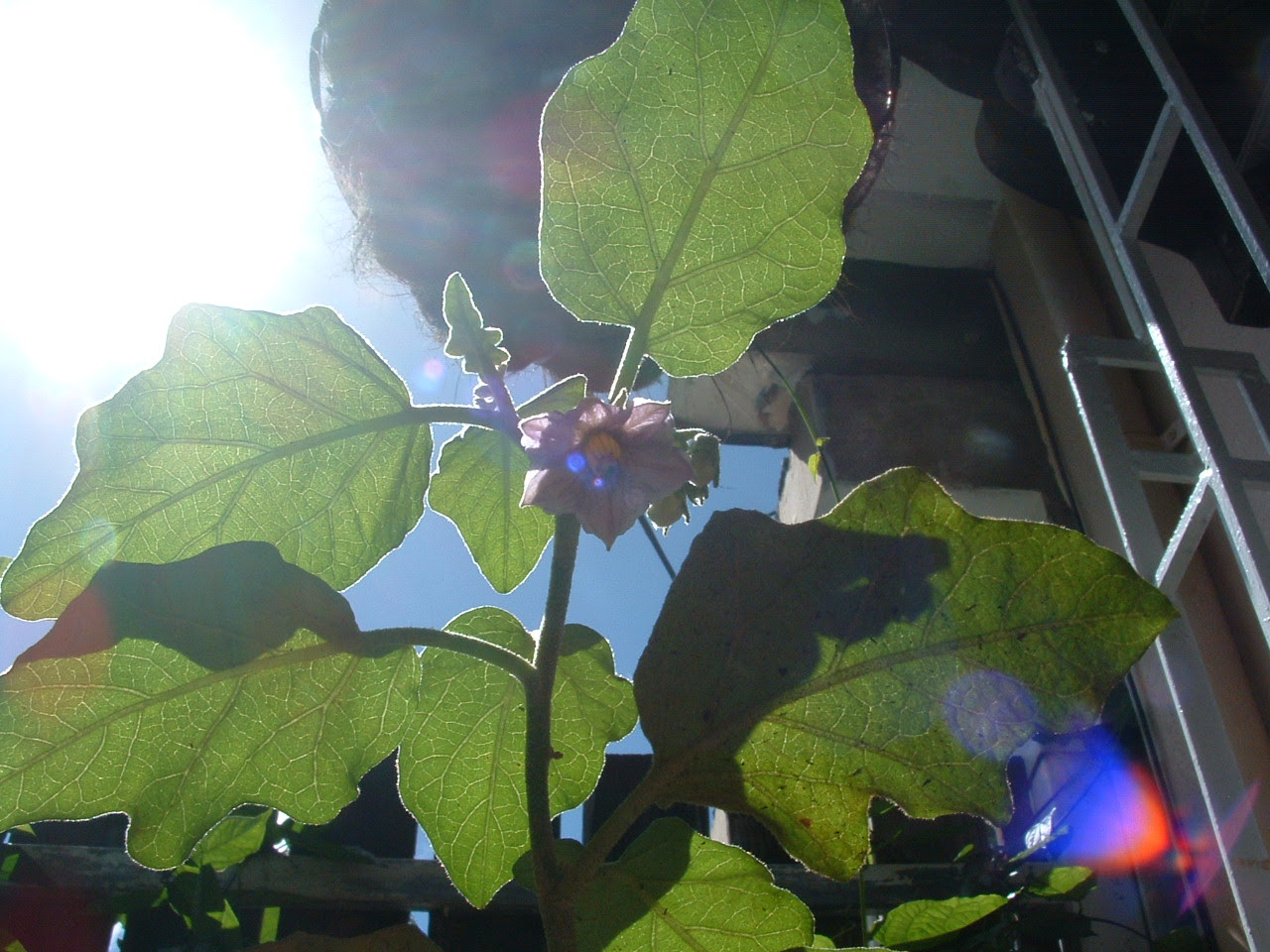 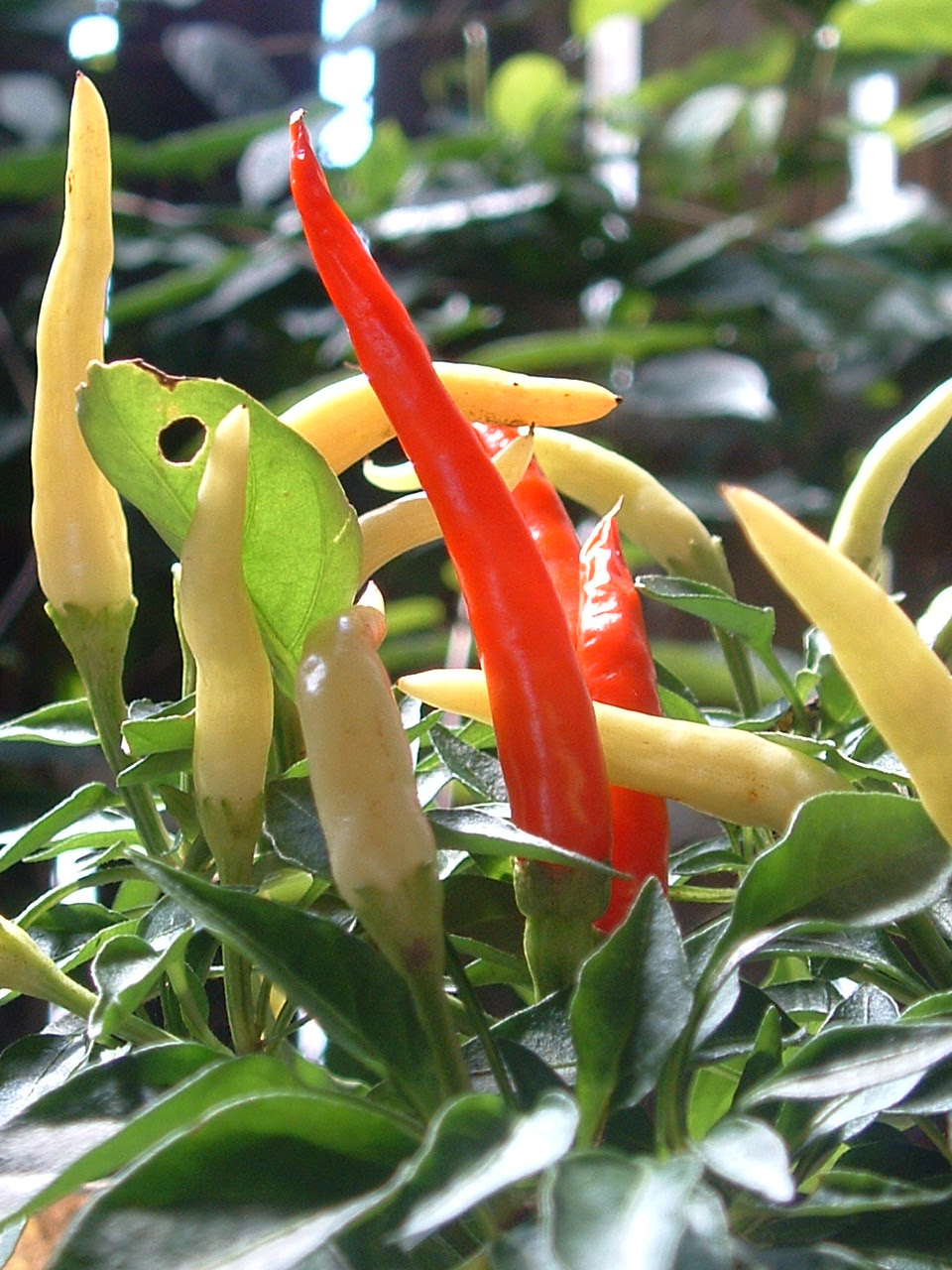 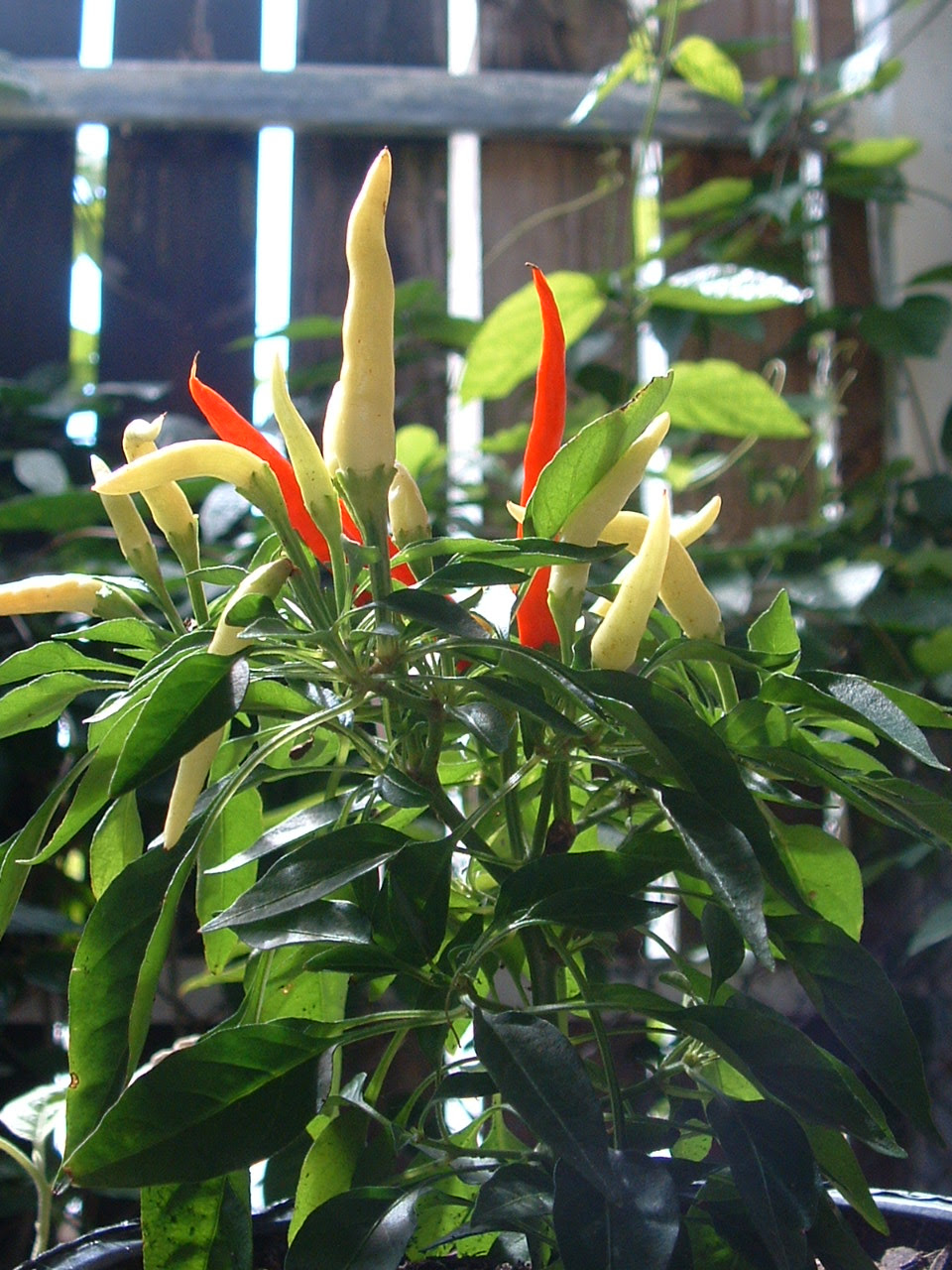 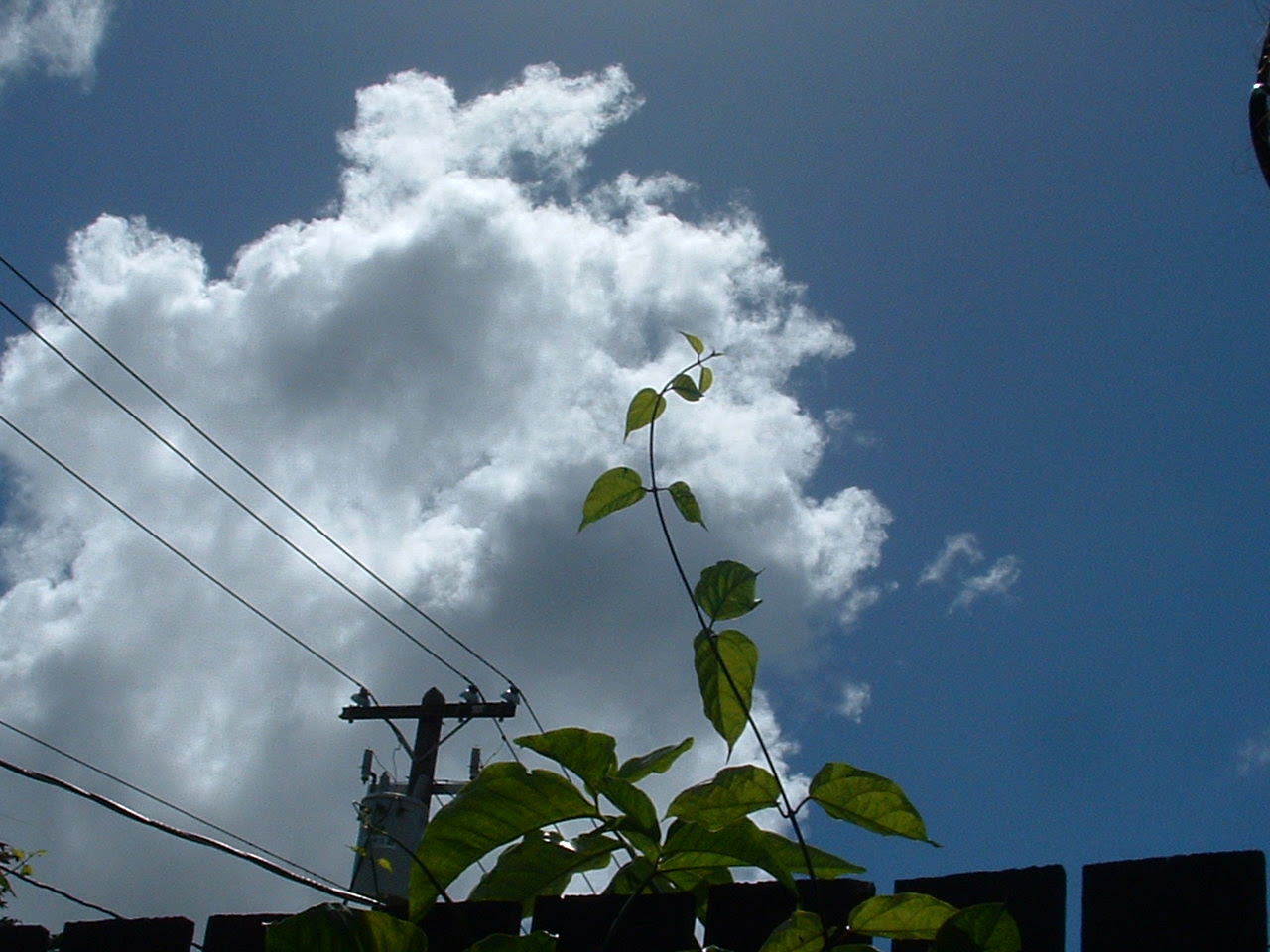 View of the sky from my backyard.
Posted by Lorena at 12:41 3 comments:

This past November el Festival Nacional Del Pastel was held in the town of Orocovis here in Puerto Rico. This is the 8th year of the Festival and the first year that I attended. I decided to go with my parents and my brother quite spontaneously, thinking maybe I would get to at least see some of the beautiful scenery of the Island not expecting much from a Festival I had never heard of. A pastel is something like the Puerto Rican version of tamales but using plantains, some people make it with rice instead of plantain. It is usually eaten during the Holidays but can be eaten any time of the year, for me it is not Christmas unless I eat roasted pork and pasteles with some morcillas (blood sausage). To get to Orocovis one has to drive a relatively short trip through the Ferré Expressway and interior small roads of the Island that curve from one side to the other as if dancing around the mountains.

Upon arriving there was the task of finding a place to park and knowing my parents this would take a while since they can be quite paranoid and constantly think everyone is trying to rob them, but to my surprise they parked in the first parking lot they found. Once we walked for a few minutes we finally arrived at a small parking lot where the Festival was. Even though it was a small humble affair it turned out to be quite fun. 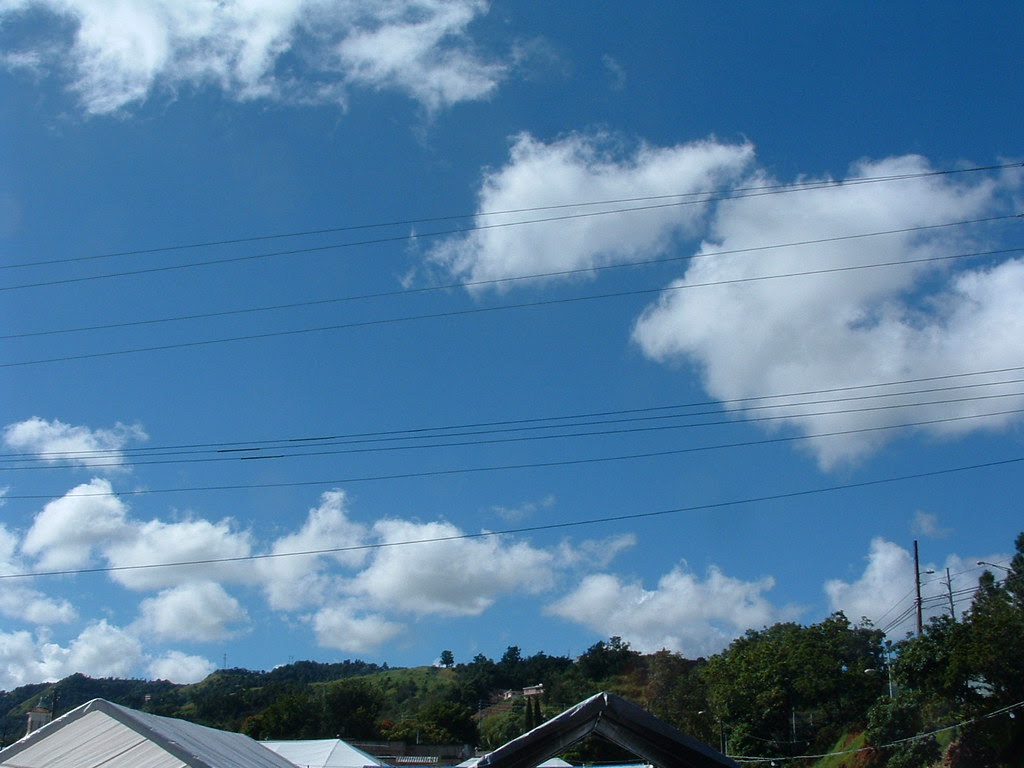 The sky looks so blue in Puerto Rico during the cold months. 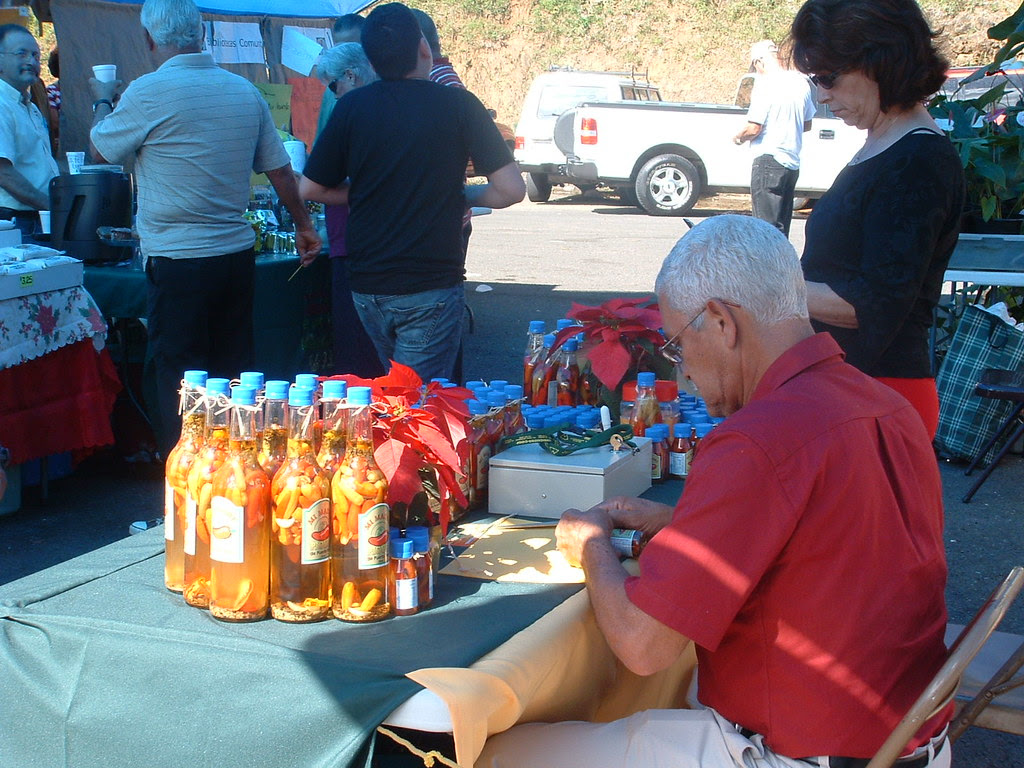 Pique is the preserve of spicy ajies (hot tiny peppers) in vinegar and oil with garlic and oregano and other herbs. It is used as a seasoning in soups, stews and meats, but can be used in almost everything you might want to make spicy. Pique Mi Madre is one of the best I've tasted, being very hot and savory at the same time. 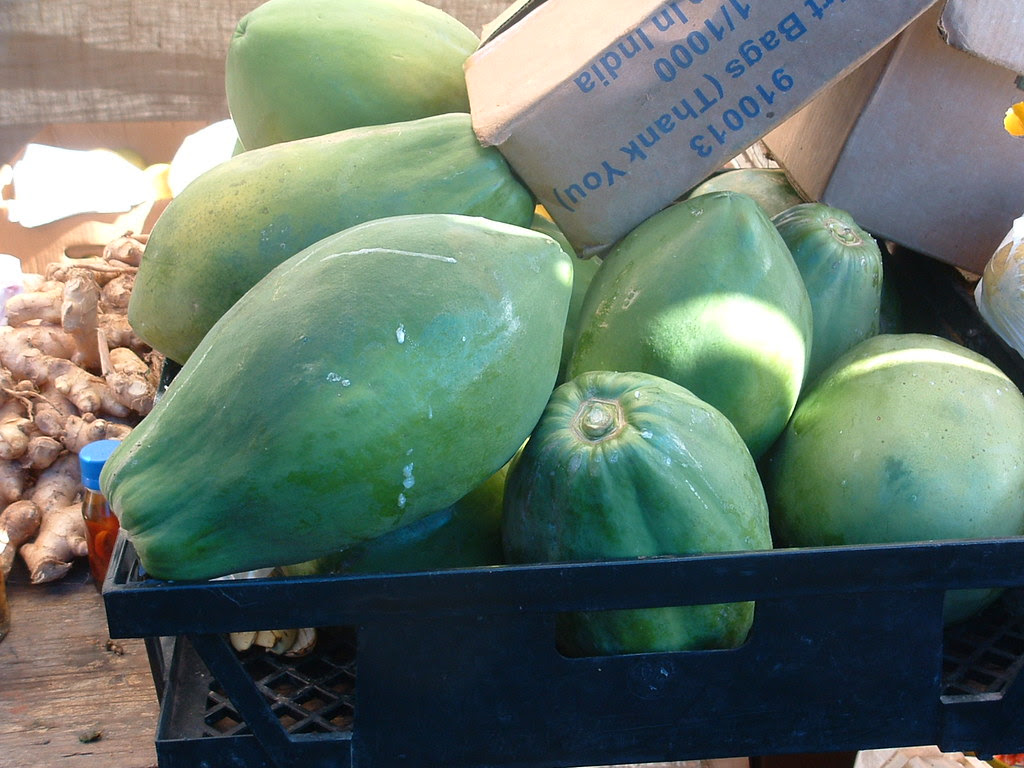 Green papayas. They are used green to make Dulce de Lechosa a kind of sweet preserve that tastes deliscious with some white cheese. 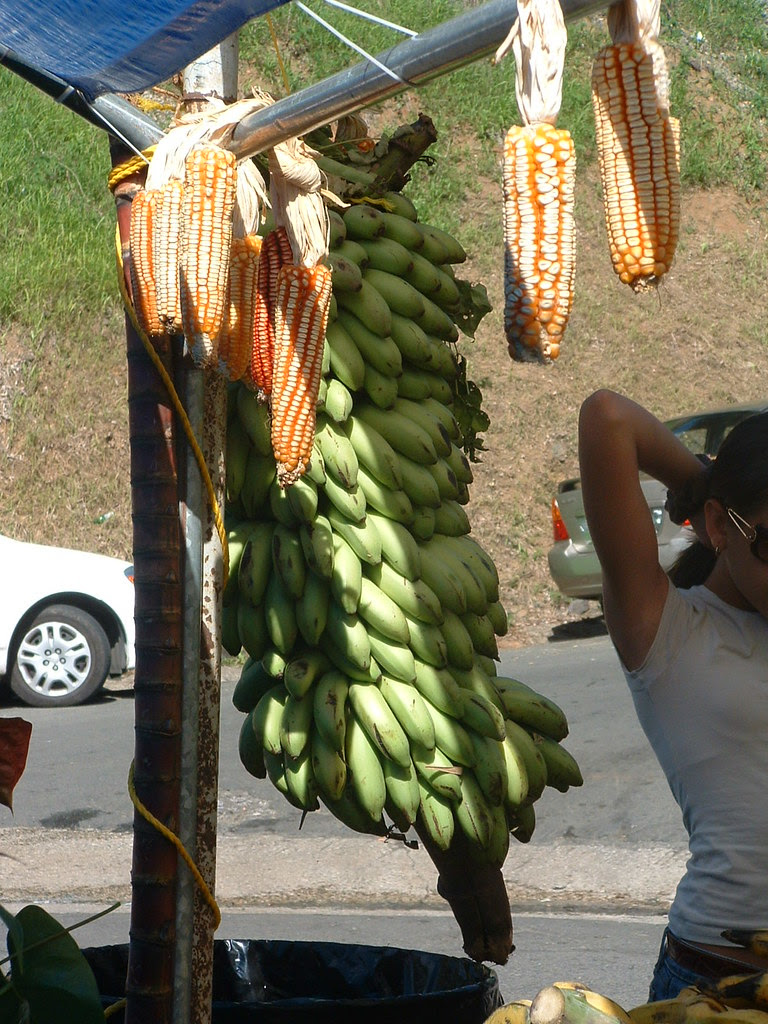 Green plantain, perfect to be eaten boiled or as platanutre, the Puerto Rican version of potato chips. 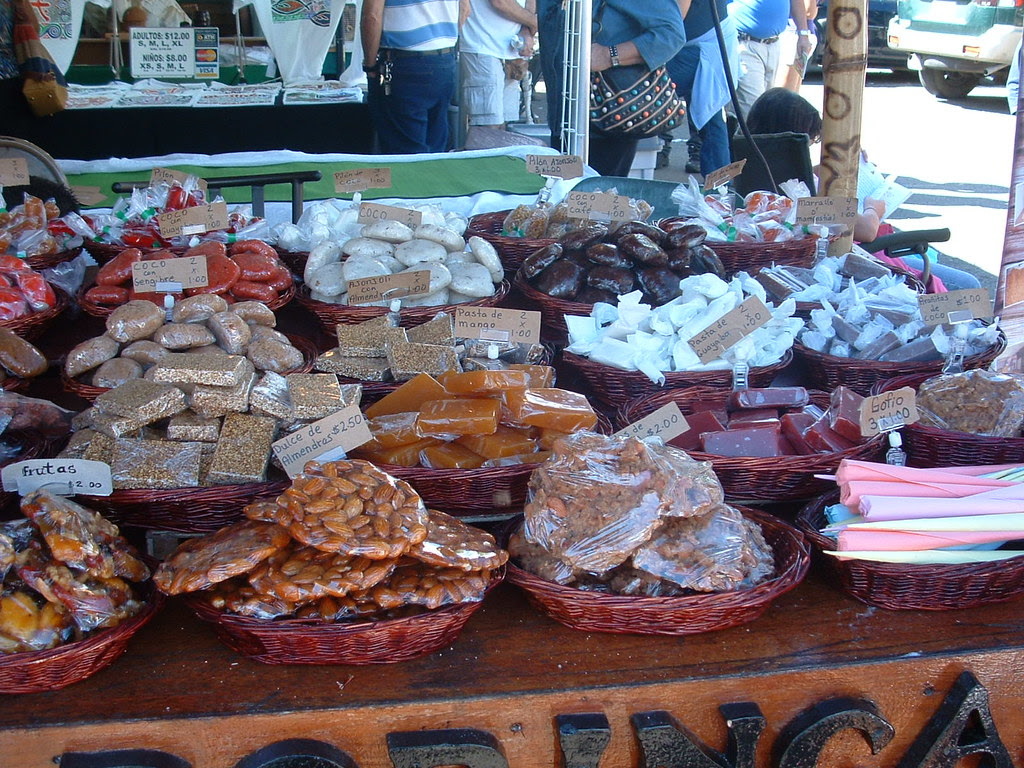 Puerto Rican candy: Dulce de coco a candy made with coconut and hard caramel are the small round ones in red (dulce de coco covered in strawberry candy), pink (with guava), white and brown (with coffee) in the back; dulce de ajonjoli made with sesame seeds are the squares at the left; to the right is pasta de mango or mango paste, something like quince or guava paste but with mangos; in the front left is the candied dried friuts in hard caramel; Dulce de almendras or almond candy is in front, kinda like peanut brittle; and to the front right is more Dulce de coco. 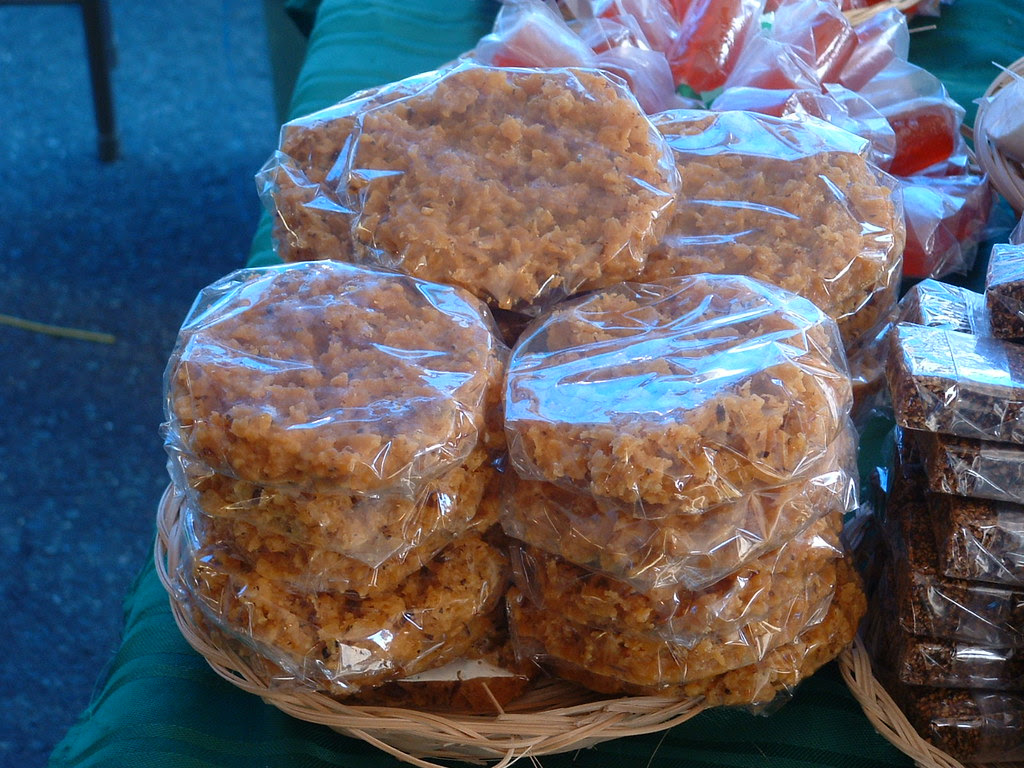 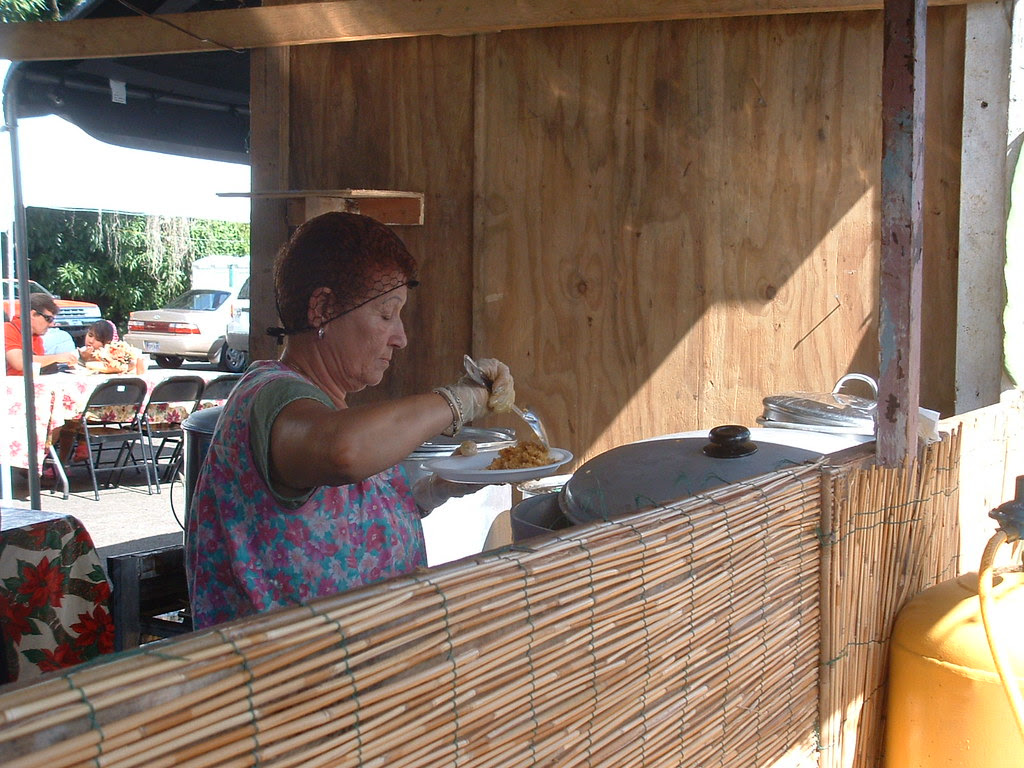 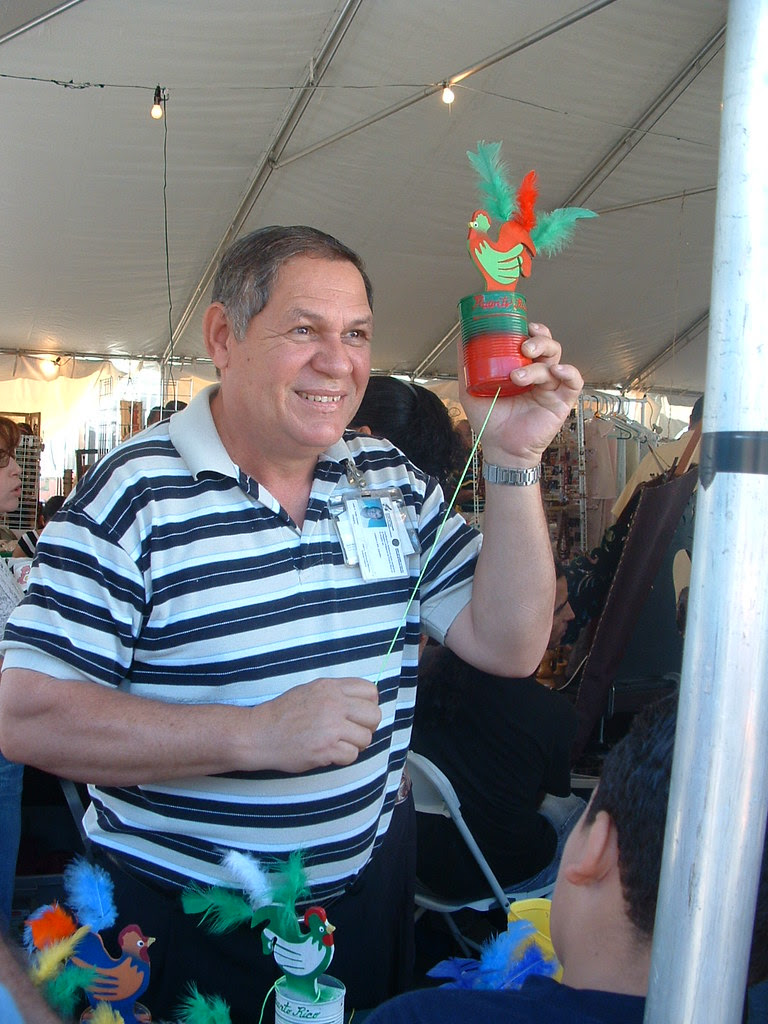 This man was sellind that weird can with the rooster on top. When you pull the string it makes a sound like a rooster. Me and my brother heard it and thought they had live roosters in the festival and ran towards the noise excited about it only to find the man with the can. 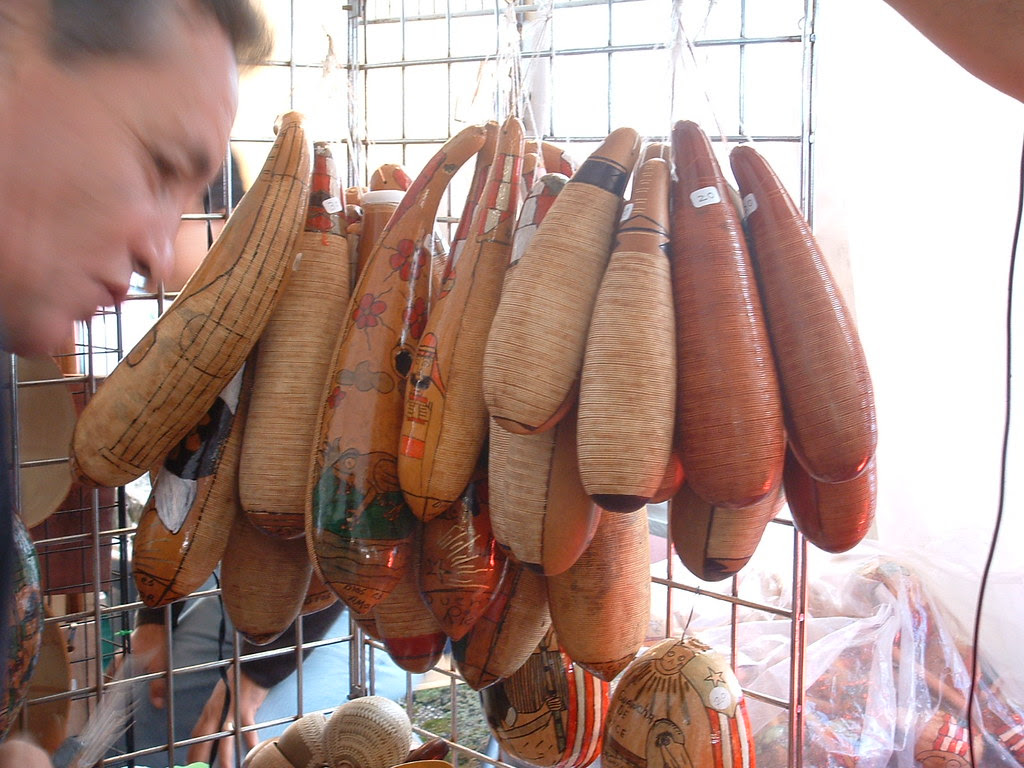 Güiros. Typical musical instrument that is played by scraping thelined part with a kind of metal brtush, made from higueros, a type of gourd. 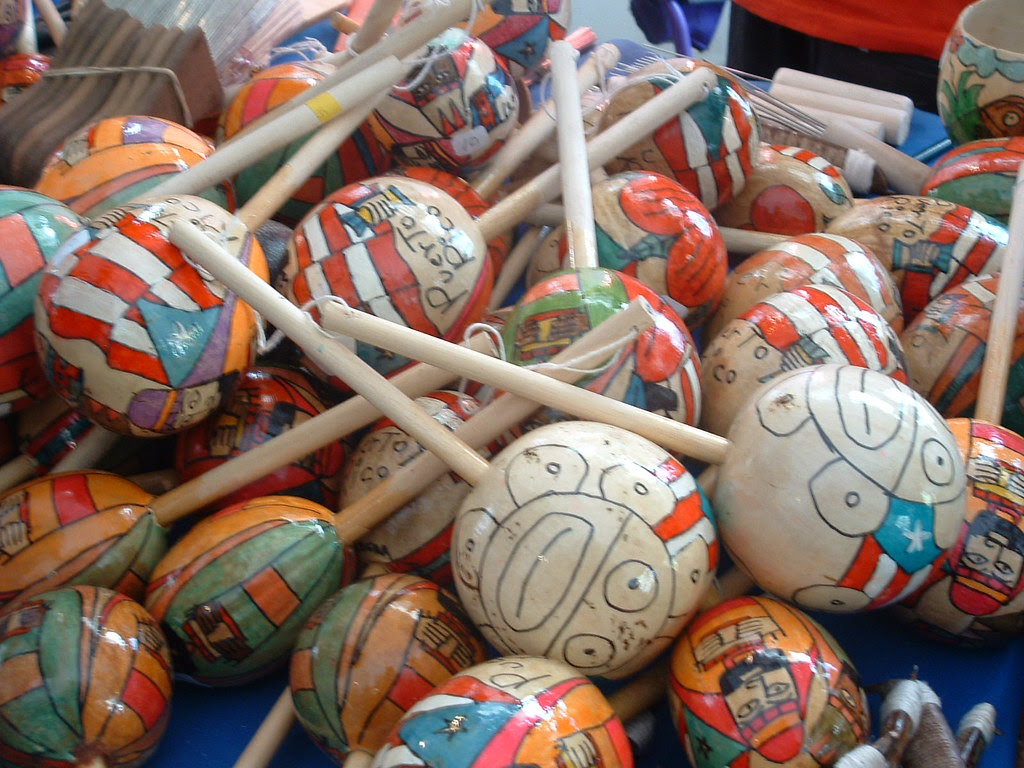 Maracas with the Puerto Rican flag and Taino Indian drawings. 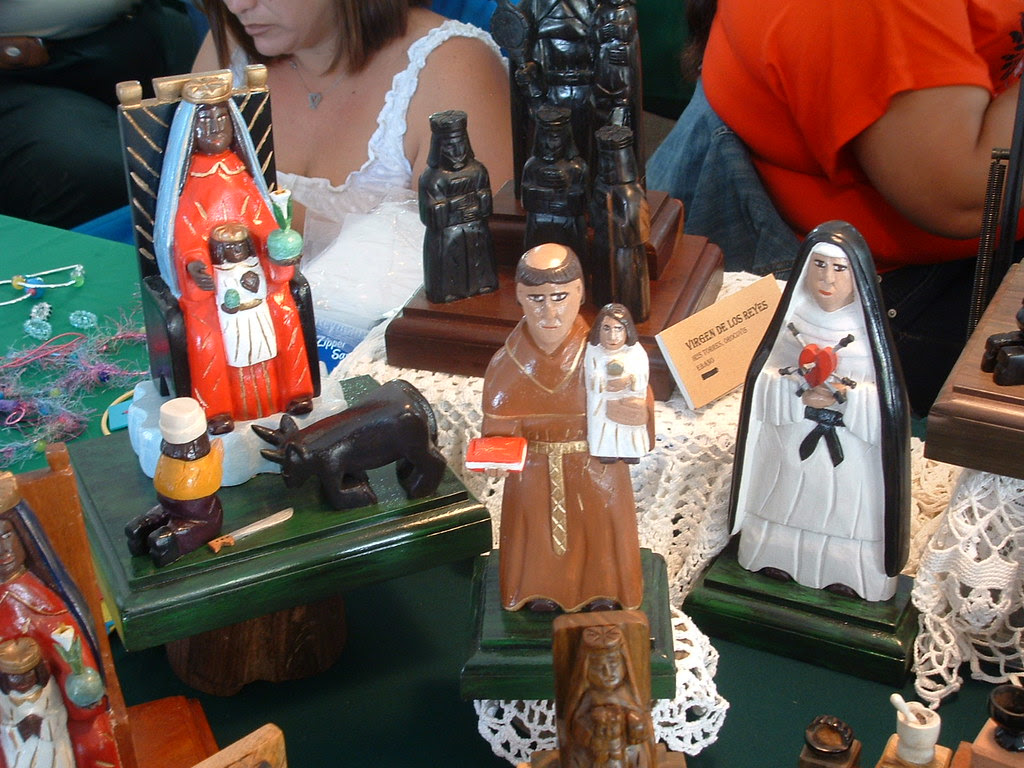 
The Festival del Pastel has a website that has more information and its history: http://www.festivaldelpastel.org/portal/index.htm
Posted by Lorena at 17:43 2 comments:

I've always found that Martha and Conan have a great chemistry, I wish they would do more stuff together.